It’s a good job I’m not a cowboy, I’m not the quickest at the draw and it’s been proven to me this week.

So what’s left me lying in the dust, wounded and remorseful?

For  while I’ve kept my eye on the ‘Illustrated 69 Love Songs’ blog / project which is being lovingly curated by Julia Scheele (previously art assistant for Jamie McKelvie on ‘Phonogram : The Singles Club’ and sometimes staff member at Gosh comics).

The idea’s simple, yet brilliant – inviting artists and illustrators to submit their interpretation / comic / illustration of each of the songs from the Magnetic Field’s opus ’69 Love Songs’.

I’d previously fancied having a crack at ‘Busby Berkley Dreams’ as it’s my favourite track from that album. Well it’s my favourite track if I’m feeling like I need depressing through a plaintive piano and sporadically soaring vocal describing a long-lost romance gone sour distilled through a melancholy view of 1930’s hollywood glitz, a love of geometry *AND* whirling stages.

Being both a newbie and an amateur in this area (read that as ‘no decent portfolio and not my career’). I thought I’d draft something up, fiddle with it and see if I could come up with A) a halfway decent idea and B) a halfway decent illustration. If I could do both then I was going to drop Julia a line, cough, smile, apologise and ask if I could have a go.

I spent a few evening’s getting back into using Manga Studio and the Wacom pad. Sketched some idea’s on paper and started in earnest.

Over one evening I managed to draw something in the region of 40 ladies in swimming costumes perched on a tier of rotating stages as a possible cover for ‘True Romance’ magazine.  I was reasonably pleased with the result and decided to press on.

Later that evening I went back to the site to get Julie’s email address for the ‘do you mind if I have go’ email, only to find I’d missed the boat.

Not only had I missed the boat but the person sailing away in it was a bloody brilliant illustrator – Nidhi Chanani (http://storybird.com/nidhi-chanani/).

Turn’s out that all round comic superhero, theorist and general top bloke Scott McCloud had posted about the Illustrated 69 Love Song’s over the weekend and the ‘How Fucking Romantic’ blog had gone bonkers with new hits and new collaborators.

Important lesson for me here – have faith in your own ability and step forward sooner. There’s only two types of people in this game – the quick and the dead.

Which is how I come to end up, metaphorically at least, in the dust, licking my wounds and being thankful we were only armed with spud guns.

On the up side I’ve concluded that it’s the sort of gig that actually would most benefit a professional illustrator, after all their career relies on exposure and reaching new audiences. One day mine might, but right now I’m strictly amateur and practically able to do only a handful of hours a week around my other commitments. So I’m actually really pleased for Nidhi and I can’t wait to see the results (so I’m now following her on Twitter).

I’ve also decided to keep going with my version. Turn’s out it’s been a really useful exercise for me in layout planning, pacing of dialogue, style and practice with tools I’m not yet fully conversant with. Helpful along the way of producing Catastrophe Noir – something smaller and easier to deliver, to show people and say – does this work, where am I going wrong?

So, what did I come up with?

My concept for the song is to use a 1930’s black and white film strip to provide the comic panels that partially narrate the lyrics. Keeping each page with a central image of the ‘True Romance’ magazine referenced in the song – which itself features a Busby Berkley film illustration and text on the cover that narrates other parts of the Lyrics. Here’s where I’ve gotten so far: 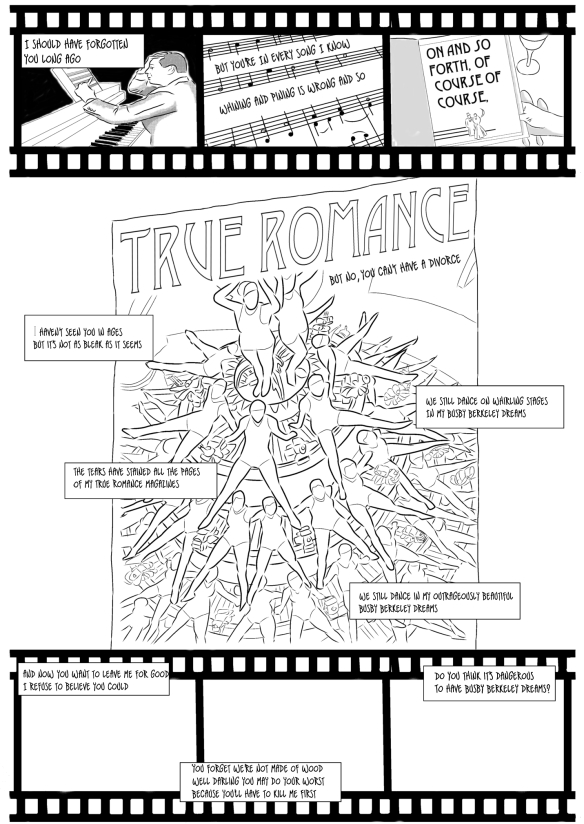